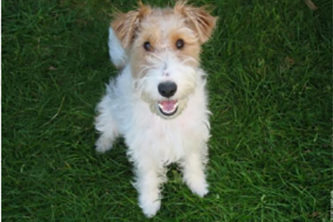 Jordy, a 10 year old female fox terrier, presented to the hospital for drinking a lot and just being a little quieter than usual. After full blood and urine tests, the usual suspects, kidney disease, diabetes and Cushing’s disease, were ruled out.

Chest x-rays were then taken and a small, subtle mass was identified in the front of the chest. With the aid of ultrasound, we were able to obtain a fine needle biopsy of the mass. The pathology, although not conclusive, suggested it was a tumour. A CT or ‘cat scan’ was subsequently done which really helped define the tumour and its position just in front of the heart butting up to the aorta. Jordy underwent open chest surgery and the mass was successfully removed.

Sadly, further pathology of the mass revealed it to be a malignant ectopic thyroid tumour. Yet there is still hope for Jordy. The early removal of the tumour has given her a head start on recovery and we are now following up with chemotherapy.

Chemotherapy may evoke certain negative images in people’s minds, but every effort is made to design a combination of medications that will kill off cancer cells whilst being as gentle as possible on the rest of the body.

Jordy is coping well with her chemo and certainly seems to be on the mend. She is happy and we hope she will still live a full life. More than most cases, Jordy’s problem highlights how different diagnostic and therapeutic procedures came together to save her.